Trash talk: Rail may be answer to hauling debris off Long Island 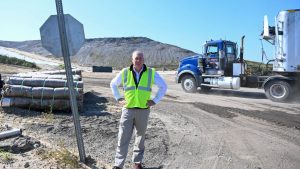 Will Flower, vice president of Winter Bros., outside the Brookhaven landfill in Yaphank, which is slated to close in 2024. Credit: James Carbone

Yaphank, NY – October 31, 2020 – A plan to build a Yaphank waste transfer station that would take thousands of tons of trash daily from construction sites — and cart it off Long Island by train instead of trucks — is being touted by its West Babylon developer as a major step in partially replacing the Brookhaven Town landfill.

The project, which faces questions about its impact on air and water quality, comes as Long Island municipal and waste management officials brace for the planned closure of the landfill — one of the island’s last municipal dumps — in December 2024, when it is expected to reach capacity.

Closing the landfill — which takes incinerated household trash from waste-to-energy plants, as well as construction and demolition debris — could force incinerators, contractors and waste management companies to haul trash hundreds of miles to landfills upstate or as far away as Pennsylvania and Ohio.

Winters Bros. Waste Systems, which is in the early stages of drafting plans for the transfer station on part of the wooded 228-acre Brookhaven Rail site off Horseblock Road, said the facility could be one facet of efforts to compensate for the landfill’s closure. 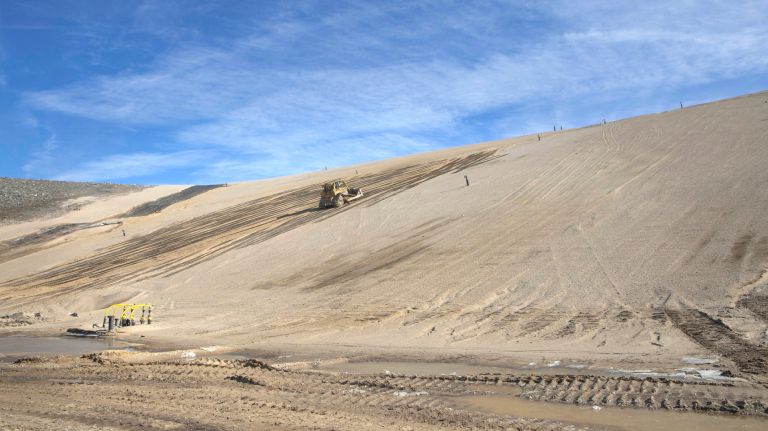 The facility would receive and process up to 2,000 tons daily of construction and demolition debris, which would be shipped by freight trains to landfills off Long Island. The plan requires approvals by Brookhaven and possibly a federal agency that regulates freight rail projects.

Brookhaven Town is developing a separate plan to store ash after the landfill closes.

Will Flower, a Winters Bros. vice president, said the transfer station, with its own 23,680-foot rail spur connecting to nearby Long Island Rail Road tracks, also would help relieve traffic congestion and reduce air pollution by taking about 145 tractor trailers off Long Island highways every day.

The Winters Bros. project is one of at least three rail transfer station proposals awaiting approvals. Others include a facility proposed by Gershow Recycling at its Medford headquarters, and a transfer station planned by Omni Recycling in Brentwood.

Brookhaven Town officials have not taken a position for or against the Winters Bros. plan. But Supervisor Edward P. Romaine, speaking on Oct. 6 at a Long Island Association forum on solid waste issues, acknowledged the town needs “a path forward” to deal with trash when the landfill closes.

“We are currently trucking,” he said. “But we should definitely take a look at rail transportation.”

Closing the landfill is expected to cause ripple effects throughout Long Island. Three of the Island’s four incinerators — which burn about 65% of Long Island household trash — and dozens of contractors use the landfill.

Besides Brookhaven, the only major repository for construction and demolition debris is a privately run facility in Melville.

“We know the outcome” if Long Island does not prepare for the landfill closure, Patricia Del Col, municipal market director of Melville consulting firm H2M, said during the Long Island Association forum. “It’s critical to look at a plan right now.”

None of the options for removing trash from Long Island — trucks, rail or barges — is perfect, said Frank Roethel, an adjunct professor at Stony Brook University’s School of Marine and Atmospheric Sciences. But rail is probably the most ecologically sound while trucking trash would add to Long Island’s traffic woes, he said.

But the Winters Bros. plan is facing questions from civic groups and environmentalists who say it poses potential harm to drinking water and would threaten a 68-acre conservation easement on part of the property.

Linda Petersen, president of the Yaphank Taxpayers and Civic Association, said many residents are not aware of the Winters Bros. plan, adding news of the project was “a complete shock to me” when she learned of it this past summer.

She said she worries that the facility would harm air quality in Yaphank, which already is affected by the landfill and other industrial sites, such as asphalt and concrete manufacturers.

“I think, by and large, the Yaphank community is going to be shocked,” Petersen said. “The timing on pushing this through seems not beneficial to the people who will be most affected by this.”

Environmental activists say the transfer station could do serious damage to one of the last large wooded areas in Yaphank.

Adrienne Esposito, executive director of Farmingdale-based Citizens Campaign for the Environment, said while there’s “definitely merit to the argument that rail is preferable,” building train tracks through the conservation easement “diminishes its ecological value.”

Winters Bros. must submit its plans to Brookhaven Town after the federal Surface Transportation Board on Oct. 23 rejected the firm’s bid for an expedited approval from the board.

The federal ruling appears to ensure that the project will be subject to a public hearing before Brookhaven officials. Federal review likely would not have included public hearings.

In a statement, Brookhaven officials said the ruling was a “victory for the Town of Brookhaven and local land control.”

Flower said in an email Winters Bros. accepted the decision. “Winters Bros. strives to be transparent and we will conduct all of the necessary steps to bring this project to reality,” he said.

DUMPED AT THE LANDFILL

Amount (in tons) of waste dumped annually at the Brookhaven Town landfill:

As seen in Newsday
By Carl MacGowan