The closing of the Town of Brookhaven landfill four years from now poses a looming trash crisis for Long Island. / Photo by Judy Walker

Town of Brookhaven, NY – October 9, 2020 – It’s garbage time on Long Island: Public officials and waste management firms have been ramping up planning for the growing trash crisis facing the area, much of which will be exacerbated by the closure of the Town of Brookhaven’s landfill, set to stop receiving trash in less than four years.

The problem isn’t new. Ever since the enactment of the Long Island Landfill Law in 1983 to protect drinking water, Long Island municipalities have been struggling to find the best ways to dispose of the many millions of tons of trash generated here every year.

It’s a lot. Long Island’s 2.8 million people generate 6,750 tons of garbage every single day. More than 60 percent of residential municipal solid waste (MSW) is trucked to the Island’s four incineration plants, where the burning process creates energy and ash. The ash is then transported to two local landfills that still accept it in Babylon and Brookhaven.

Though it’s landfill is scheduled to close in 2024, Brookhaven is seeking to create a 60-acre Regional Recovery and Recycling Residue Facility next to the landfill that would take in 350,000 tons of ash a year for another 15 to 20 years. If the state Department of Environmental Conservation approves, the proposed facility would also accept auto-fluff, a waste product created in automobile shredding, about 100,000 tons of which is dumped at the landfill annually.

In the towns of North Hempstead and Oyster Bay and the City of Glen Cove, residential MSW is compacted and taken off the Island in trucks, where it’s dumped at distant landfills in other states. In addition, private waste management firms, such as West Babylon-based Winters Bros., currently packages commercial MSW at local transfer stations and trucks it off the Island.

The area’s waste-disposal dilemma was the topic of a webinar hosted by the Long Island Association on Tuesday.

“The garbage crisis impacts the environment, impacts our municipalities and impacts our economy,” said Kevin Law, LIA’s CEO. “It’s going to require coordination and collaboration with the public and private sectors.” 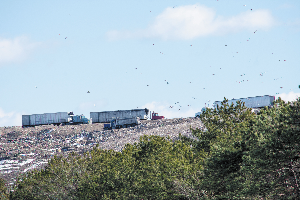 Brookhaven is seeking to create a 60-acre Regional Recovery and Recycling Residue Facility next to its landfill that would take in 350,000 tons of ash a year for another 15 to 20 years. / Photo by Judy Walker

Pat Del Col, municipal market director for H2M architects+engineers, agreed that the closure of the Brookhaven landfill will have many impacts.

“Now is the time to start planning,” Del Col said during the webinar. “If we don’t have sufficient transfer stations, municipalities will have to deal with illegal dumping.”

Probably the most pressing issue is what to do with the increasing amount of construction and demolition (C&D) waste, which comes from both residential and commercial sources, since the Brookhaven landfill will stop accepting it in 2024.

While New York & Atlantic Railway, the freight carrier for the Long Island Rail Road, already transports some C&D waste off the Island by rail from transfer sites in Farmingdale and Lindenhurst, the bulk of the area’s C&D waste is currently brought to two landfills that still accept it, a private operation at 110 Sand & Gravel in Melville and Brookhaven’s municipal landfill in Yaphank. 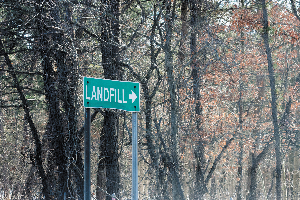 But once Brookhaven’s landfill closes, the nearly 750,000 tons of C&D waste that it takes in every year will need another place to go.

That’s why several local firms are jockeying to create facilities that will enable them to move that C&D, and eventually some MSW, to out-of-area landfills by rail, eliminating tens of thousands of costly truck trips. The math is simple: Each truck can carry about 20 tons of C&D waste, while each rail car can handle 100 tons.

And speaking of numbers, moving trash by rail could lead to a big payoff, eventually yielding operators at least $200 million in annual revenue, according to industry estimates. The trash crunch will also boost tipping fees, the charges paid for disposal. Currently averaging around $95 a ton, industry sources say tipping fees could increase by as much as 50 percent, once the landfill is closed and fully capped.

The biggest proposal is a $187 million project now being planned by Winters Bros., which will turn 228 acres in Yaphank into a massive mixed-use development including a rail-served waste transfer station, 120 acres of warehousing and distribution facilities, and 68 acres of green space.

The plan would consolidate the company’s transfer stations in Bohemia, Holtsville, Medford, Yaphank and Quogue to further reduce truck traffic and improve efficiency. 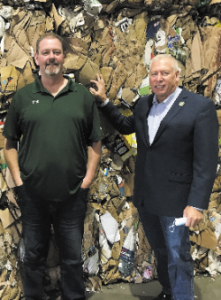 JIMMY WINTERS and WILL FLOWER: Winters Bros. is pitching a $187 million project to turn 228 acres in Yaphank into a massive mixed-use development including a rail-served waste transfer station. / Photo by David Winzelberg

In May, Winters Bros. purchased Brookhaven Rail, a Class 3 short-line railroad that currently serves the Brookhaven Rail Terminal. Brookhaven Rail, which will be renamed Shamrock Rail, was purchased from an entity controlled by Manoj Bhargava, billionaire founder and CEO of Innovations Ventures, the parent company behind the 5-Hour Energy drink. The waste management firm is currently in contract to purchase the 228-acre site for its mixed-use project from a Bhargava-controlled entity called New York Site Operations LLC.

Initially, Winters Bros. considered a venture with BRT on its trash-by-rail plans, but the waste management firm went solo. BRT had previously sought to buy the property from New York Site Operations.

BRT’s controlling entity, Sills Road Realty LLC, filed a lawsuit in State Supreme Court in February, claiming that Winters Bros. breached its non-disclosure agreement and is seeking $25 million in damages. The suit, which is still pending, claims that “any transaction involving the acquisition of the property and railway assets in which Winters could participate had to include Sills Road,” according to its complaint.

“It should come as no surprise that their rush to build a waste transfer station is under the ruse of a crisis to avoid oversight and public comment,” BRT President Andrew Kaufman said via email. “Any comprehensive review would quickly reveal that this is not the place for such a garbage facility and the applicant is not even the lawful applicant for such a proposal.”

Winters Bros. executive Will Flower said the case brought by Sills Road is without merit.

“Sills Road has done nothing to develop its own piece of property that continues to be the source of dispute with the town over the mining of sand on the property,” Flower told LIBN. “Winters Bros. believes the 228-acre property is ideally suited for a rail-serve transfer station and industrial park and we’re moving forward to make it a reality.”

Medford-based Gershow Recycling is also planning to develop a facility to move C&D waste by rail. The 56-year-old, family-owned company, which processes scrap metal, has shipped by rail for nearly 40 years and can fit 100 rail cars on its property.

Gershow is planning to build a 38,000-square-foot rail-transfer station on a 6-acre industrial-zoned site on Peconic Avenue near its Medford headquarters. The $12 million to $15 million project will only handle C&D debris.

“We do need more facilities and these investments will come from the private sector,” Gershowitz said. “But ultimately, the public sector has to approve the project.”

Omni Recycling of Brentwood is also working towards creating a 41,600-square-foot rail transfer facility at 80 Emjay Blvd. in Brentwood that aims to process and load C&D debris and MSW onto trains. The facility expects to handle at least 1,200 tons of pre-processed C&D waste and 800 tons of baled MSW daily.

A fourth company, SDG LLC, is also vying to create a rail transfer facility to haul trash from its property across from the Brookhaven landfill. The company is currently in talks with two national firms to lease its property for the operation.

This isn’t the first time that trash-by-rail projects have been pitched on Long Island. In early 2017, the state Department of Environmental Conservation weighed a proposal from Green Rail Transfer that would utilize the site of an asphalt plant on Furrows Road in Holtsville to transfer up to 900 tons of baled MSW a day from trucks to train cars that would take the garbage to Virginia landfills. But the company withdrew its bid a few months later.

Meanwhile, the new rail plans are on track to move forward. Without them, Flower says, the Island will drown in its own garbage.

“The Brookhaven landfill has been the anchor for the past 30 years and Long Island is going to be facing a very serious public health threat when it closes,” he said. “Waste keeps coming at you. There has to be infrastructure to handle that.”

As seen in Long Island Business News
By David Winzelberg